Jorge Espinoza is an Assistant Professor of Violoncello at New Mexico State University and cellist of La Catrina String Quartet. Jorge was awarded the Gregor Piatigorsky Full Scholarship to study and teach at the Peabody Conservatory of Music the undergraduate and graduate cello studio as an assistant teacher of Stephen Kates. He holds a Graduate Performance Diploma in Violoncello and a Graduate Performance Diploma in Chamber Music from Peabody Conservatory of Music, having studied with Stephen Kates, David Hardy, and Andrés Díaz.

His passion for teaching cello and coaching chamber music groups has brought him to present masterclasses and workshops in the United States and abroad, including at the Third International Seminar Portuguesa-Acarigua, Venezuela, part of El Sistema.

Jorge’s orchestral experience has included performances at the Kennedy Center with the National Symphony and orchestras and chamber ensembles in Carnegie Hall, Lincoln Center, and Symphony Hall. He has been a featured soloist and chamber musician, performing concertos, solo and chamber music recitals in his native land, Chile, and throughout South America, the United States, Europe, and Mexico.

An avid chamber musician, his interest in researching, performing, and arranging folk music from Latin America for string quartet and chamber ensembles has brought him to different cities in South America including Buenos Aires to pursue studies with great tango masters including Maestros Osvaldo Berlingieri, Mauricio Marcelli, Osvaldo Requena, and Julián Plaza. 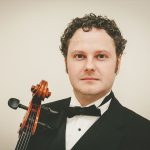