Mara I. Arredondo is a fifth grade orchestra teacher in the Ysleta Independent School district of El Paso, Texas, where she implements the string pedagogy methods of renowned pedagogue, Mimi Zweig.  Additionally, Mara maintains a small private studio of serious musicians dedicated in achieving the highest level of performance techniques. Furthermore, she is a supremely dedicated performer who sustains her performance career by regularly participating in concerts with the El Paso Symphony Orchestra and the Las Cruces Symphony Orchestra, where she acts as assistant principal.

Mara I. Arredondo is a recent honors graduate from the Jacobs School of Music at Indiana University where she studied with world-renowned violist/violinist and composer, Atar Arad.  Supplementary studies were dedicated to chamber music and pedagogy with some of the nations most elite professors including: Pacifica Quartet’s, Masumi Per Rostad; Bass Professor, Kurt Muroki; and as mentioned earlier, string pedagogue Mimi Zweig.

In August of 2010, as an incoming freshman at Texas Tech University, Mara was awarded a full contract with the Lubbock Symphony Orchestra, of which she was a participant of for the duration of her undergraduate degree. In June of 2011, she was nominated for and awarded a private scholarship by the Clara Freshour Foundation.  She was a student of extraordinary violists Renee Skerik and Dr. Kimberly Sparr, and was also heavily influenced by the teachings of well-established violinist Annie Chalex-Boyle, and cellist Jefferey Lastrapes. 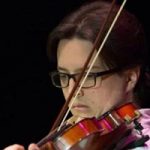 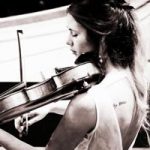